Via Ferrata A. BENINI

Via Ferrata A. BENINI

The Alfredo Benini via ferrata is a historical itinerary on the Brenta Dolomites that connects the Grostè pass to the Bocchetta di Tuckett, via exposed ledges and views as far as the eye can see towards Lake Molveno, the Brenta Dolomites and the Adamello and Presanella group.

A very satisfying climb, also suitable for those who want to try this wonderful dolomitic activity for the first time.

from 100 €/per person
Via Ferrata
Brenta Dolomites
request/booking

Meeting point at 8.30 a.m. at the Grosté cable car park.
Briefing and equipment handover to participants.
Ascent by cable car to the Stoppani refuge.

From Grostè pass (2444m), where we will be able to admire unique views over the Brenta Dolomites, the Presanella Group, Adamello and Cevedale, after a short approach (about 40 minutes) we will reach the starting point of the Alfredo Benini via ferrata. The first part of the via ferrata goes uphill along a very panoramic ledge that will take us to an altitude of 2900 m and then downhill and back again, among exciting views over Lake Molveno and towards the Adamello Presanella Group, on the western side of the Brenta Dolomites, until we reach the Bocca di Tuckett (2648 m) and then return, first across the glacier and then along the path to the Tuckett refuge (2270 m), to the Casinei refuge, to Vallesinella (1511 m) and finally to Madonna di Campiglio by bus service. 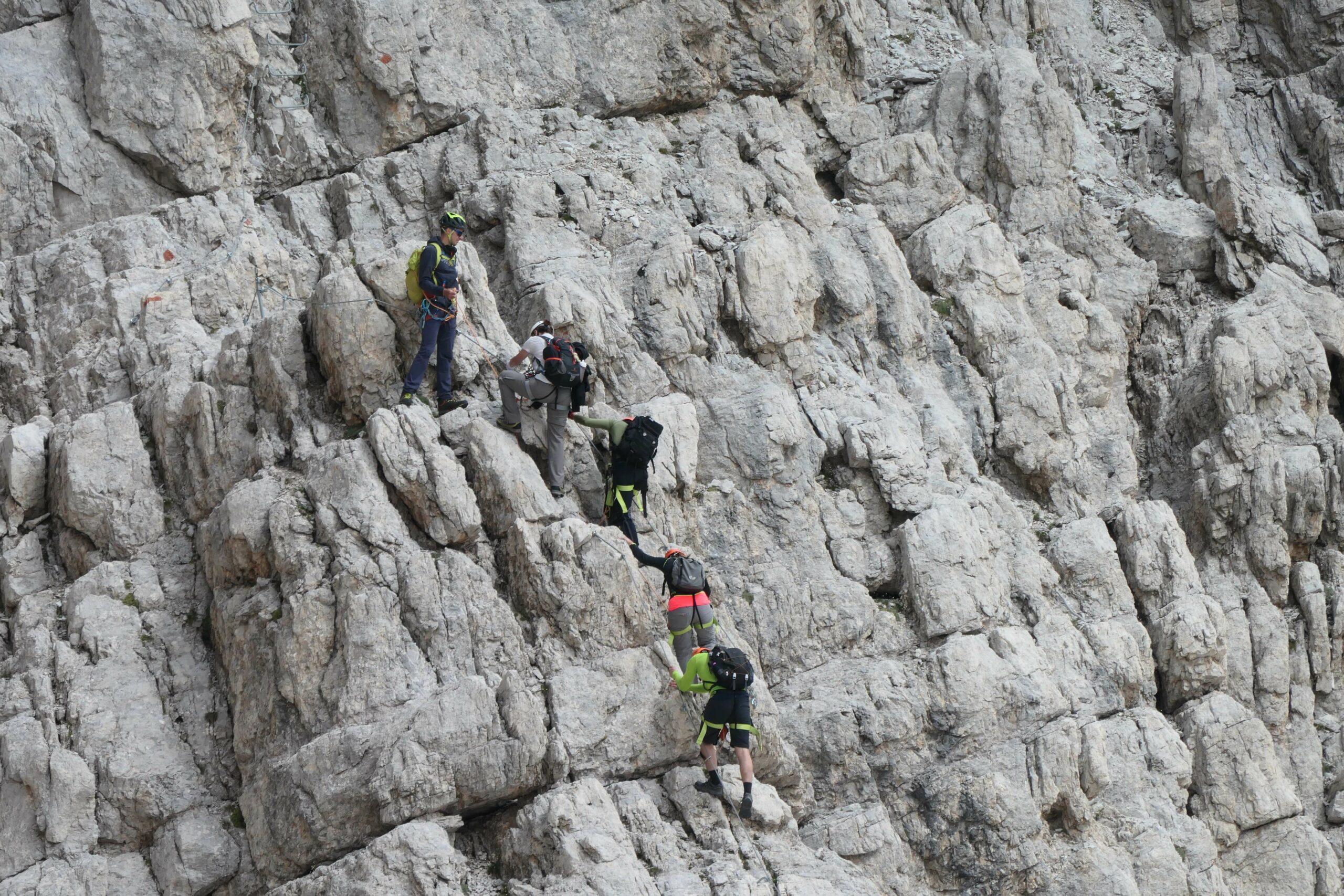 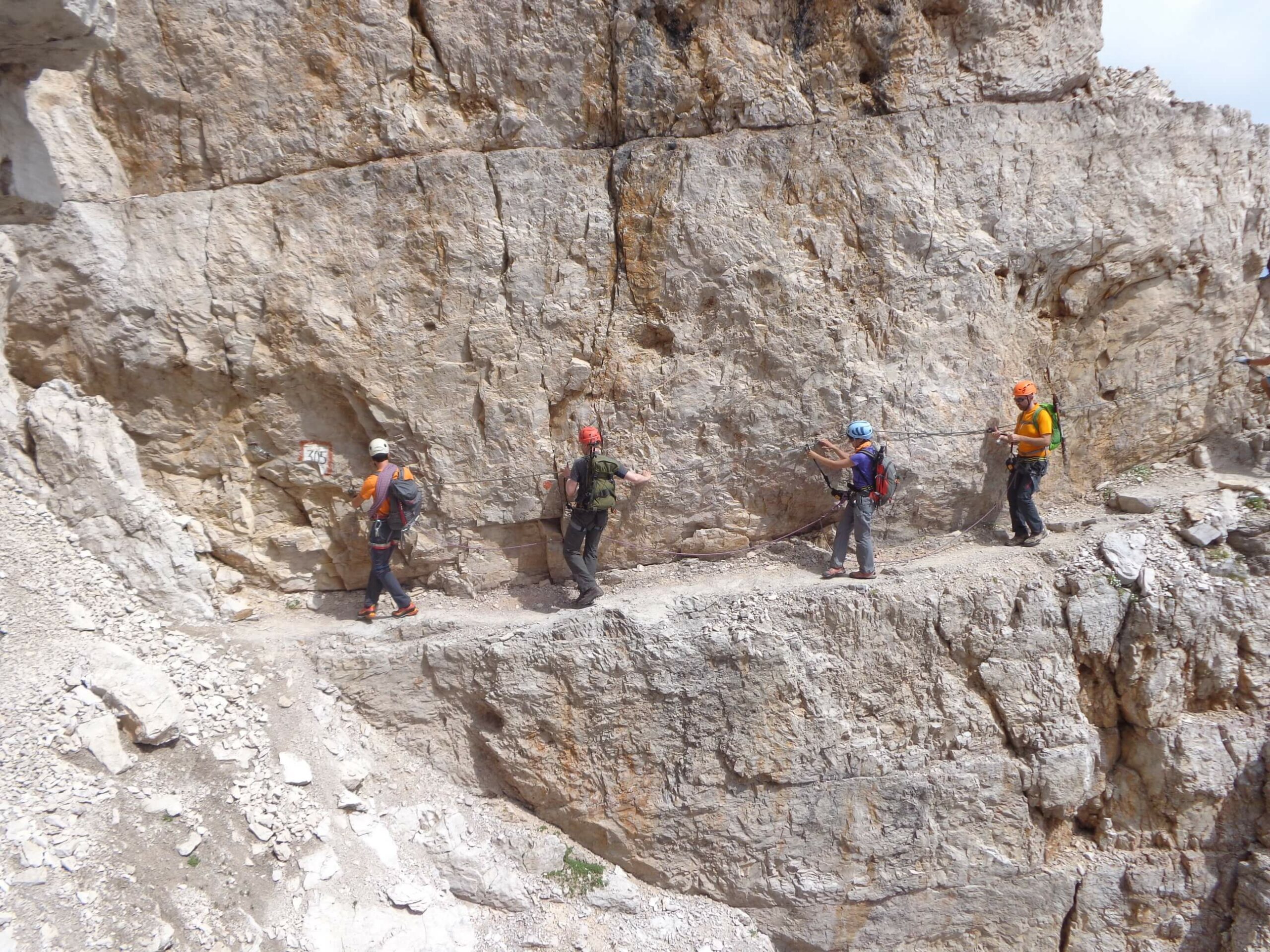 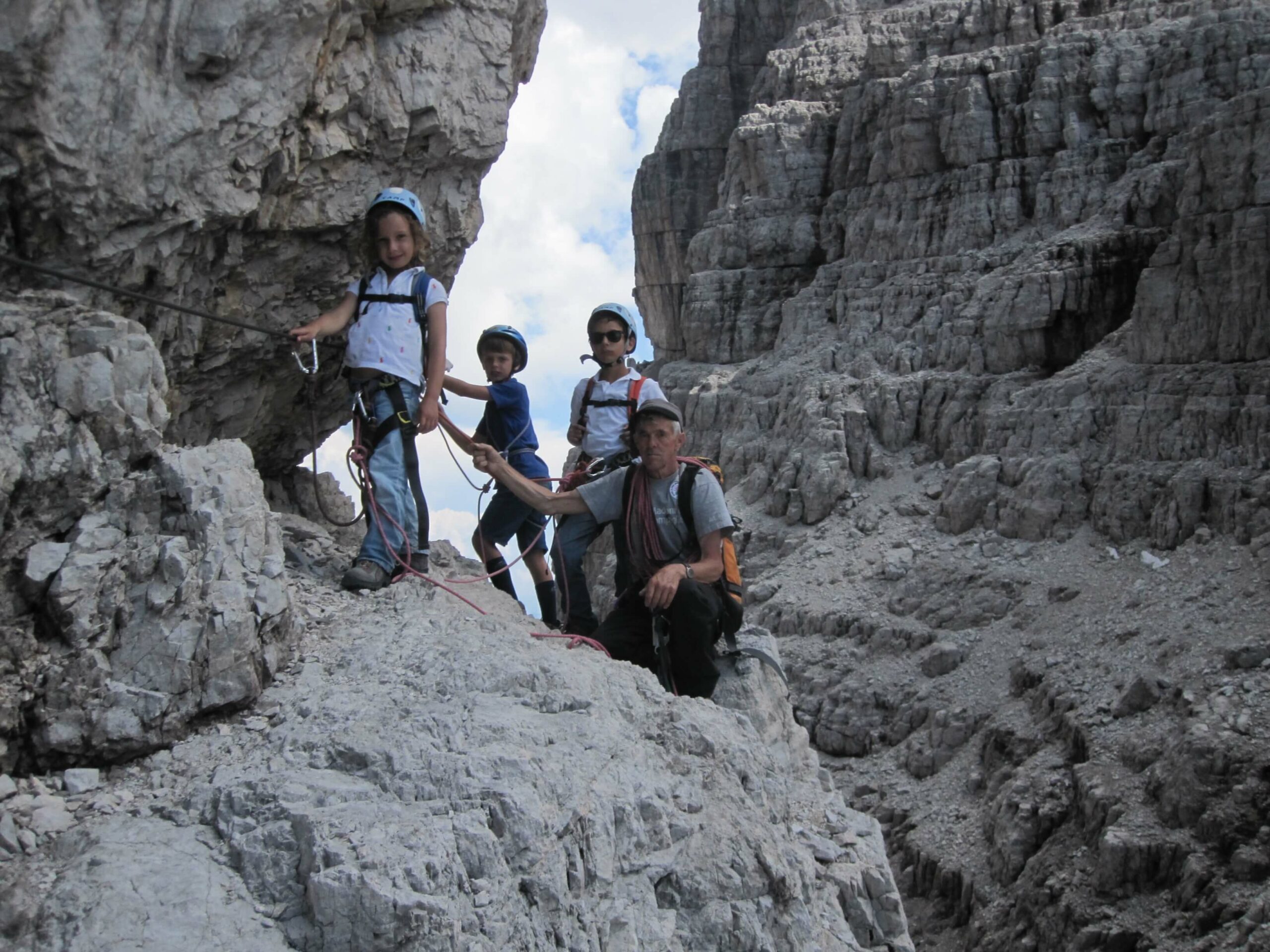 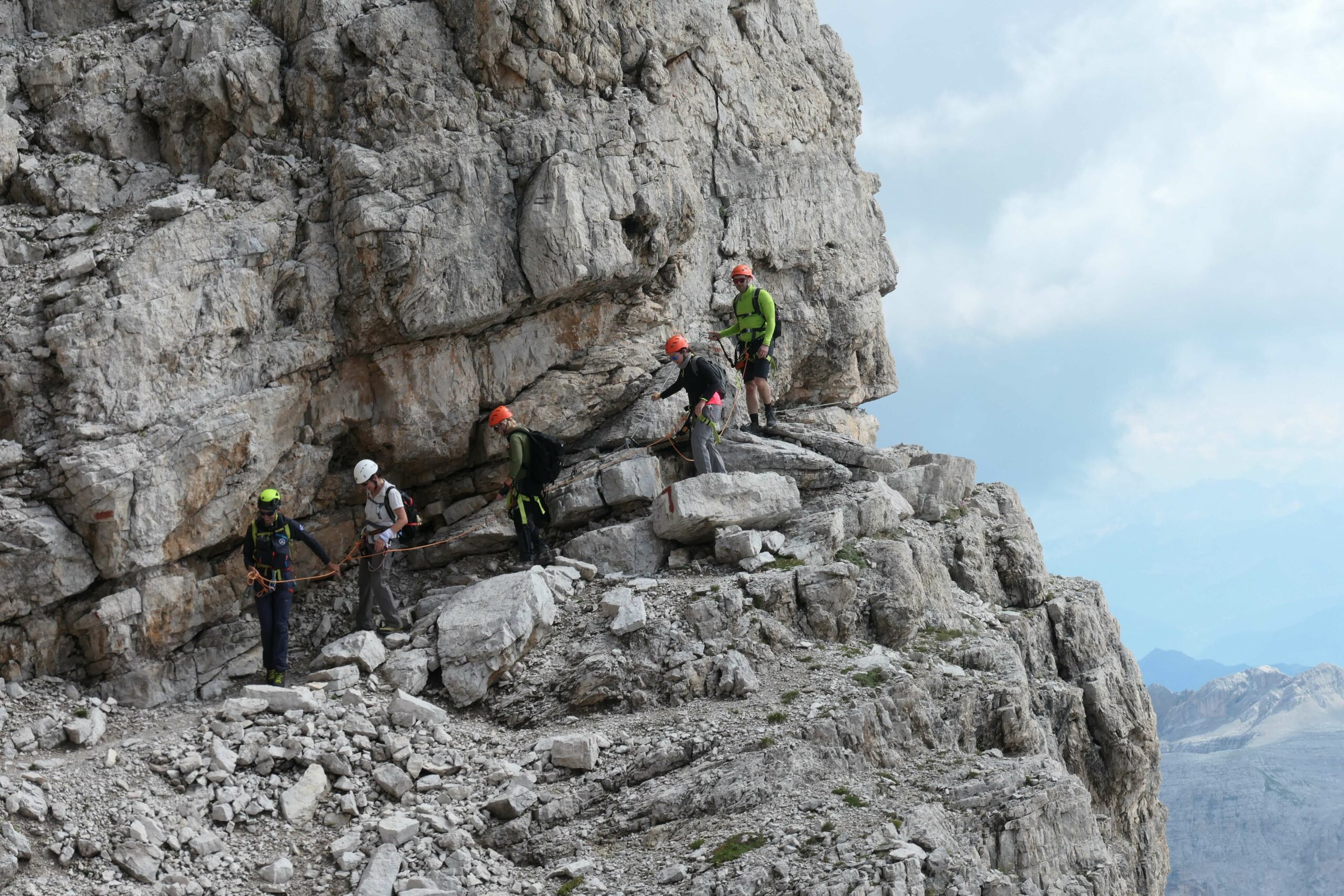 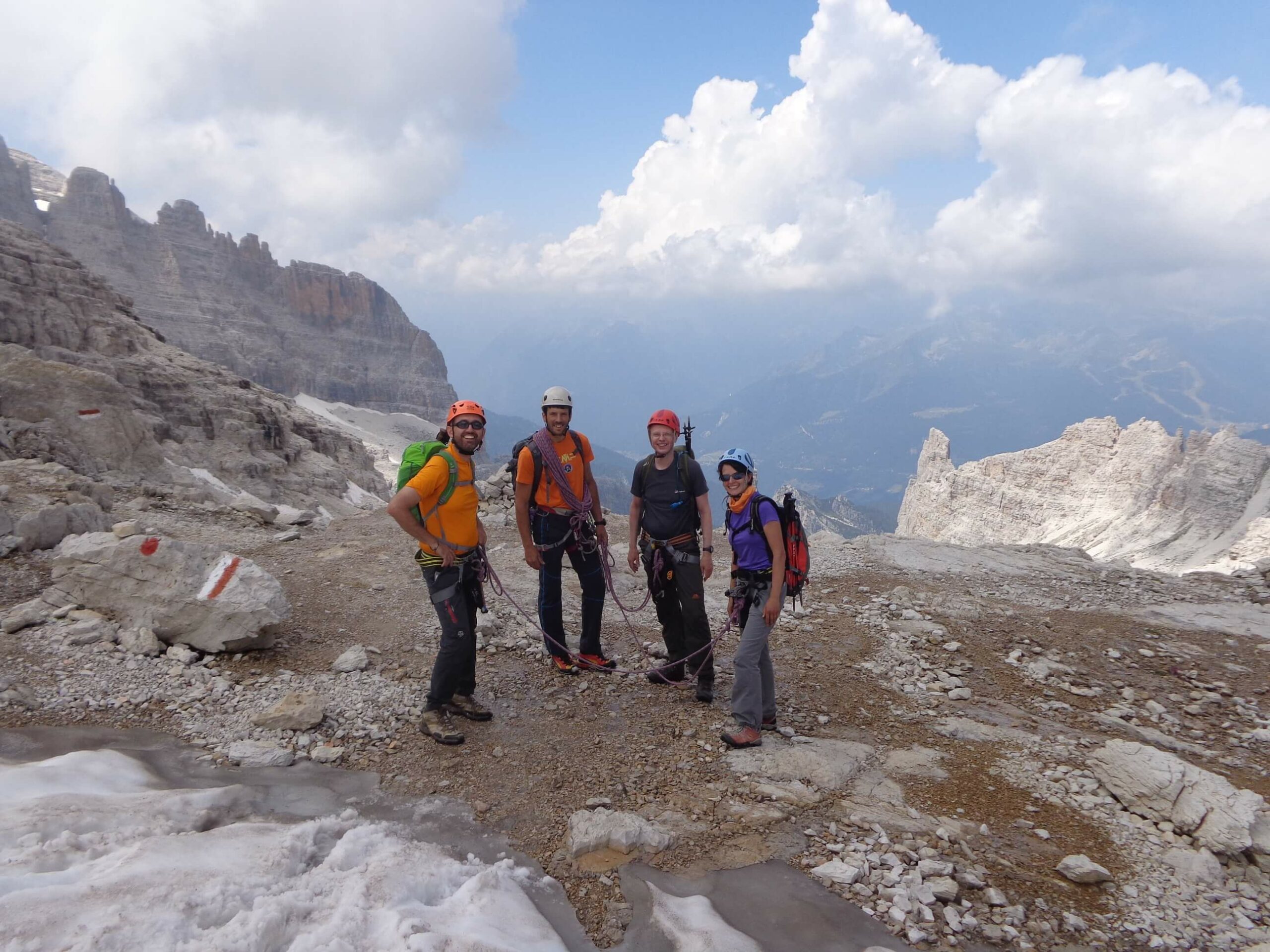